No products in the cart.

For these 783 million people, there are no taps, no supermarkets stocked to the brim with beverage choices. In the majority of these cases, the only water source is a natural one. This includes streams, rivers, ponds, and lakes.

Drinking isn’t the only thing the water is used for either. Both the local wildlife and human population use this water for washing and as a bathroom too. As many are stagnant, these water sources become breeding grounds for waterborne diseases, such as typhoid and cholera.

Clean water, or the lack thereof, is a worldwide epidemic. However, there is an affordable, effective solution that will save lives.

We devised a simple and effective solution to treat water and save lives.

Our Khlor Gen System is a solar-powered device that uses a simple, time-tested method of electrolysis to purify contaminated water and kill disease.

None of what we do is possible without the help and support of people like you — people who are sick of just looking at statistics and instead want to do something about them. If you want to get involved, you have come to the right place. We don't ask anything of you, except for your help in changing the world.

100% of all donations goes towards getting the water units out — not some, not most . . . ALL! We do not use donations to cover overhead expenses, and we do not have any paid employees. The best part is that all donations made are tax-deductible. 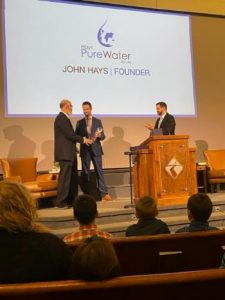 January 2023 God is opening a door to pass this ministry on to a younger generation. Pastor Joseph Brown of Marion END_OF_DOCUMENT_TOKEN_TO_BE_REPLACED 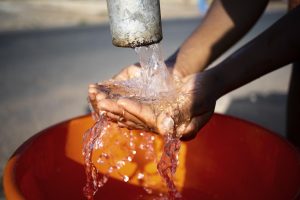 January 2023The year 2022 has seen much outreach into over 2,000 villages around the world, reaching many thousands of people END_OF_DOCUMENT_TOKEN_TO_BE_REPLACED

December 2022 This January 1, 2023, I am pleased to announce that Pure Water for All will have a new director, END_OF_DOCUMENT_TOKEN_TO_BE_REPLACED

Clean Water Is Worth More Than Gold!

During a 2022 trip to the Djagble community in Togo, West Africa, we came across the lady in this picture. END_OF_DOCUMENT_TOKEN_TO_BE_REPLACED

The Lord Jesus Christ is King of the whole earth! God is merciful to the Hays Pure Water ministry. Nearly END_OF_DOCUMENT_TOKEN_TO_BE_REPLACED

Whatever the need, we want to reach the people of this world who suffer from various diseases caused by contaminated water, which can be treated, and secure for them a better quality of life.

Questions? We'd love to chat with you!